Welcome to our Car of the Week series, where we feature BTE customers and fans, and the cars (and trucks) they love to drive and race. This week, we return to our feature with the runner up in our recent [epic!] Wheel Stand Tournament which took place over several weeks. It was a hard-fought battle, and Nat Farrar of Tullahoma, TN was the second place winner with a massive amount of support. Here’s his story, and his car. 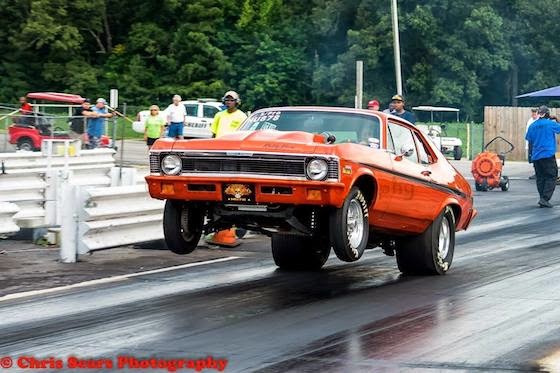 How did you get into drag racing?
Got into bracket racing though a friend back in 1996.

When and where was your first race?
My first race was in Huntsville, AL when George Howard ran the track.

What model/year do you race now?
I have a 1972 Chevy Rally Nova.

Does your car have a nickname?

What's under the hood?
It has a 383 small block on alcohol built by Ed Nix in Lawrenceburg, TN.

Which BTE products do you use in your vehicle?
BTE convertor and transmission

Why do you use BTE?
Because of the quality and workmanship of the parts.

If money were no object, what would you drive?
It would always have to be a door car because to me, dragsters all look the same.

How did you get so much support for our Wheel Stand Tournament?
It really took a lot great friends at work and my family to get as close as I did in the contest.

Do you remember what you were thinking in the middle of the wheel stand in the photo?
I was trying to win that round of racing and win the race in the end, which I wound up as the runner-up.