One of our customers and friends from Denmark has one of the coolest retro rat rods I've ever seen: 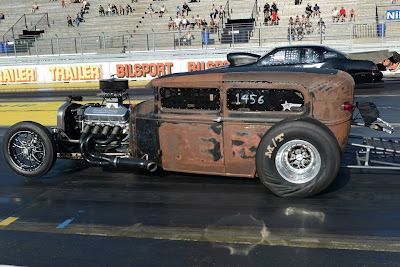 This cool ride built by Steffen Nielsen delivers the power to the ground via one of our BTE Top Sportsman powerglide transmissions and a BTE 9.5" bolt together torque converter.

Posted by Brandon Barrentine at 6:41 PM No comments: 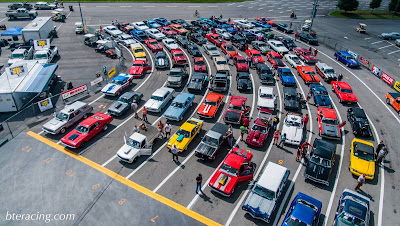 Our own Shaun West just returned from Bristol Thunder Valley Dragway where the BTE World Footbrake Challenge wrapped up this past weekend.  A great weekend of footbrake bracket racing was had by hundreds of racers, their families, and friends.  We want to thank the promoters for welcoming us back again for the seventh time.

You can see more photos on our Facebook photo gallery.
Posted by Brandon Barrentine at 6:10 AM No comments:

The BTE World Footbrake Challenge VII is underway now. Watch the racing live here!
Posted by Brandon Barrentine at 6:32 AM No comments: 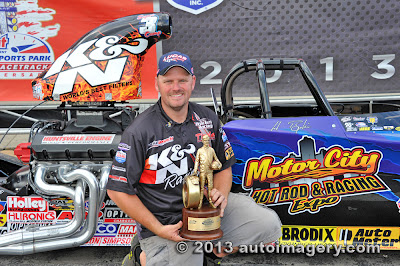 Norwalk, OH: Sportsman racing veteran Luke Bogacki earned his 6th NHRA national event triumph and first at Summit Raceway Park when he drove his Motor City Hot Rod & Racing Expo backed American Race Cars dragster to the Super Comp victory at the Summit Racing Equipment NHRA Nationals.  With the victory, Bogacki moved into a commanding lead in the NHRA Lucas Oil Super Comp national points chase; he currently leads defending champion Alan Kenny by nearly 100 points.
Bogacki, who has earned a reputation as one of the best sportsman racers in the country thanks to his success in multiple classes and venues, earned the event title despite an admittedly mediocre performance.  Normally an excellent leaver, Luke posted reaction times varying from a competitive .016 (round two) to a very late .053 (round four), but was able to manufacture winning runs despite his lack of starting line efficiency.
“It wasn’t pretty, that’s for sure,” Bogacki laughed.  “I’m sure at some point I’ve won a race or two where I was never worse than .016 on the tree; I’m not sure I had ever won a race when I wasn’t better than .016 until today!  While I’m not happy with my driving, I’m certainly not ready to start the race over to see if I can improve my box score; there are no style points out here and wins are hard to come by.  I’ll take it any way that I can get it.”
Luke and partner Dave Szerlag recently announced that they will be promoting the inaugural Motor City Hot Rod & Racing Expo; Bogacki’s cars featured the expo logo throughout the event as part of the introductory announcement.  The Motor City Hot Rod & Racing Expo is a unique event that will feature exhibitors from throughout the motorsports industry, and is open to the public.  The inaugural show will take place March 22-23, 2014 at the Suburban Collection Showplace in Novi, MI, just minutes from Detroit, Motor City.  To learn more, visitwww.MotorCityRaceExpo.com.
Bogacki’s victory culminated a 5-week stretch of domination in the ultra-competitive Super Comp category.  Since the NHRA Division 3 Lucas Oil Drag Racing Series event in Chicago in early June, Bogacki has assembled a 21-2 record in the 8.90 category, highlighted by victories in Chicago and this weekend at Norwalk, along with a runner-up finish at Cordova Dragway Park in Cordova, IL.
“It’s been an incredible few weeks,” expressed Bogacki.  “My car has just been great, it’s won almost in spite of the driver at times.  With my poor reaction times, I had to employ some smoke and mirrors this week to get the win, so I didn’t really let the car show its full potential; but this combination is really, really good right now.  Its consistency and a truckload of good fortune are the reasons for my recent success.” 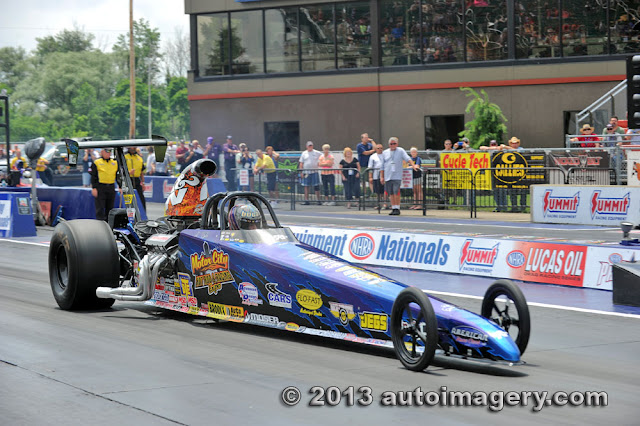 Bogacki is quick to point out that a twin to his machine can be purchased with just a few phone calls.
“I don’t know if it’s a good thing or a bad thing, but the whole car is readily available, over the counter stuff.  It’s not like I’m sitting around in my shop brewing up some secret combination. The chassis is an American Race Cars base 240” dragster; and the motor is a 632 with BRODIX SR20 heads and a BRODIX aluminum block that can be purchased carb to pan at Huntsville Engine & Performance.  Everything else on the car can be ordered at JEGS.com.”
The Huntsville Engine 632 pushes Bogacki’s machine to the 8.90 index at speeds in excess of 180 miles per hour.  In addition to the BRODIX components Bogacki mentioned, the engine features an APD “throttle stop” carburetor and belt-drive fuel pump, Lucas Oil Products, K&N Filters, Hedman Hedders with Nitroplate coating, Wiseco pistons, a Milodon Oil Pan, J&J Engine Diaper, JESEL cam drive and rocker arms, and a Crane Camshaft and Lifters.  The motor burns Renegade 116+ Race Fuel and is slowed to the 8.90 index by a Dedenbear throttle stop controlled by a K&R Performance Engineering “Pro Cube” delay box timer.
Bogacki relies on Moser Engineering axles, brakes, and rear end components, an Ohlins Shock and Mickey Thompson Wheels and Tires.  He monitors air pressure thanks to an AirTek pressure monitor, and depends on a BTE Top Dragster transmission and torque converter.  Bogacki says that the Auto Meter Multi-Function Data Logger, which he uses to monitor and evaluate critical information including air/fuel mixture, engine & driveshaft RPM, G-force, and critical engine functions, is a huge key to his continued success.  Additional components include a B&M Pro Bandit shifter controlled by a Dixie electric shift solenoid, ISC Racer’s Tape, Nitrous Express components, and Earl’s hose and fittings.  Todd’s Extreme Paint designed and applied the car’s gorgeous paint job.
With his most recent win, Bogacki appears to be in dominant position atop the NHRA Super Comp standings.  The longtime racer, however, understands how quickly a championship season can turn and how many events remain on the 2013 schedule.  In 2010, he took the Super Comp lead with a clutch October LODRS victory, only to watch 4-time champion Gary Stinnett overtake him and earn the title at the final LODRS event of the season.  Last season, Bogacki fought hard all year but finished 3rd in both Super Comp and Super Gas.  He is yet to earn a NHRA world title.  With 591 points in early July, Bogacki acknowledges that 2013 promises his best opportunity to win the Lucas Oil Championship, but is quick to point out that it’s far from over.
“I’m right where I had hoped to be at this point,” he said.  “But I’m not going to kid myself.  591 points is a great total in July, but 591 isn’t going to win the championship.  I’ve still got a lot of work left to do.  My goal at the start of each season is to get to 650.  Even 650 doesn’t guarantee the championship, but if you reach that mark you’ve had a championship worthy season.  That total is realistic for me this year, but the key is to keep digging and get there.”
Luke Bogacki’s key supporters include the Motor City Hot Rod & Racing Expo, ThisIsBracketRacing.com, K&N Engineering, Tinsley Drilling and Company, C.A.R.S. Protection Plus, Advanced Product Design (APD), Product Development Group – makers of AirTek pressure monitoring systems and Flo-Fast fluid transfer systems, JEGS, Bill Taylor Enterprises (BTE), and Mickey Thompson Tires & Wheels.
Posted by Brandon Barrentine at 6:30 AM No comments: 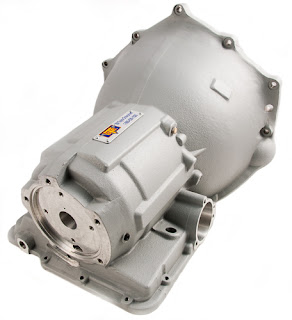 For the month of July, BTE is offering its popular powerglide SFI approved housing for a special price of $808 with free shipping.  This offer is available online at http://www.bteracing.com/BTE-NEW-Powerglide-Case.html as well as by calling us at 1-800-626-1828.

This housing is fully SFI approved.  No transmission blankets or shields are required for competition.  A special IKO roller bearing is installed in the rear of the case to reduce output shaft drag.  This heavy duty casting requires no liners.

BTE uses this housing on all of its Top Sportsman, Pro Mod, and Top Dragster racing powerglide transmissions.
Posted by Brandon Barrentine at 8:49 AM No comments: