“It’s always good to have new equipment that’s on the cutting edge of technology,” Bogacki said. “I think most of us as sportsman racers are not under the assumption that a class like Super Comp requires the forward thinking of a professional category, but there are always technological advancements. The trick, for me, is updating equipment to take advantage of the constantly evolving landscape of technology, while at the same time using the knowledge and data that I’ve built up over the last decade as a platform. So in the end, a new car is always a combination of some new ideas and some tried and true components and principles.” 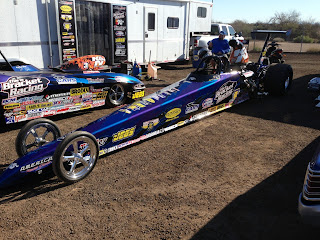 “This is my first 240-inch car, my past dragsters have always been 235” Bogacki said. “Mark (Horton, of American Race Cars) has been trying to talk me into a longer car for a couple years, and after seeing some scale figures from one I finally gave in.”

The chassis features Mickey Thompson Wheels and Tires, including the company’s popular 3183 (33.5 x 16.5-16) racing slick. Bogacki monitors air pressure thanks to the innovative AirTek pressure control system, which he’ll stock on his trailer in 2013 and beyond. Moser Engineering components make up the entire rear end assembly, as Bogacki will rely on a Moser M9 housing, complete aluminum 3rd member, 40-Spline axles, and Moser’s new line of Performance Drag Brakes. Suspension demands are handled by a single Ohlins TTX-36 series shock and spring.

The machine is powered by a brand new all-aluminum 582 cubic-inch Huntsville Engine. 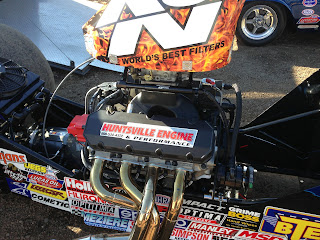 “The guys at HEPC are building me a new 632-inch engine with the BRODIX SR20 heads,” explained Bogacki, “but it wasn’t ready in time for Pomona. We actually built this 582 for my Charlie Stewart Race Cars ’63 Corvette Super Gas car, but I slid it over in the dragster to start the season. I’m actually very impressed with it; I ran 8.89 at 177 mph in Pomona. Nonetheless, I plan to swap out and install the SR20 engine following this introductory western swing.”

The 582 cubic inch motor currently in the car features a BRODIX aluminum block, a set of BRODIX Head Hunter cylinder heads, and BRODIX manifold. Bogacki enlisted Nitroplate to coat the intake manifold, valve covers, and accessories in their low-temp black finish. A Crane Cams camshaft and lifters operate Jesel shaft rocker arms and rotates thanks to a Jesel Belt Drive system. Wiseco pistons provide necessary compression (roughly 15:1), which is then exhausted by a set of Hedman Hedders coated by Nitroplate. A Milodon oiling system pushes Lucas Oil 20w/50 race oil through a K&N oil filter, while the J&J Performance engine diaper surrounds the bottom end should disaster strike. Bogacki cools the engine thanks to a Dedenbear remote water pump, water header, and expansion tank (also coated by Nitroplate) which are plumbed using ANO-Tuff hose and fittings from Earl’s Performance Products.

Luke will pump Renegade 116+ Racing Fuel into the tank thanks to a Flo-Fast management system. The sleek Earl’s black ANO-Tuff components carry Renegade racing fuel to a belt-driven APD fuel pump with a built-in bypass regulator, and then on to an APD 1050 carburetor that is built specifically for throttle stop applications. Currently, an electric Dedenbear throttle stop controls the air/fuel mixture entering the motor, which allows Bogacki to hit the 8.90 Super Comp index.

“With all of the new developments in throttle stop technology, I’m very excited about testing some new products this year,” beamed Bogacki. “We’ll start off with the tried and true Dedenbear electric stop that I’ve had great success with in the past. At some point early in the season, however, we’ll be testing a new Dedenbear stop, and I’ll be working with John Kyle of APD to test his new line of carburetors with the throttle stop built in. I’m really looking forward to see what we come up with on those items, because I really like the ingenuity and forward thinking that went into both of them.” 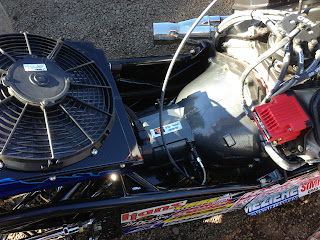 
In the driver’s compartment, Luke will once again rely on the Auto Meter Multi-Function Data Logger for his in-dash display and download needs. Within the Auto Meter MFDL, he monitors basic functions like oil pressure, water temperature, voltage, fuel pressure and vacuum. He also keeps a close eye on readings that he says play a big part in dialing his combination to the 8.90 index.

“The 02 sensor is probably my biggest tuning aid, particularly on the throttle stop,” Bogacki said. “We also play close attention to the driveshaft rpm, transmission temperature, and the built-in G-meters. This is information that the average racer without the Auto Meter MFDL system doesn’t have access to; but it has really sped up my learning curve over the years, particularly in ‘super’ class competition.”

Bogacki will also continue to use a K&R Performance Engineering Pro-Cube Delay Box and K&R Severe Duty Switch Panel to control all of the electronic functions of the new machine. He’ll select gears thanks to a B&M Stealth Pro-Bandit shifter controlled by a Dixie Racing Products electric shift solenoid.

The carbon-fiber hoodscoop, mounting tray, and air filter come from K&N Engineering. The professionals at Todd’s Extreme Paint handled the body work and paint of the new machine, as they have the last several of Bogacki’s competition vehicles. The majority of components used on the car were purchased at JEGS.com, and Bogacki also leaned on Nitrous Express, ISC Racer’s Tape, and Charlie Stewart Race Cars for small products and assistance.

Posted by Brandon Barrentine at 6:29 AM