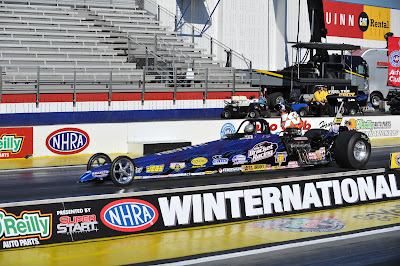 Las Vegas, NV: After finishing the 2012 NHRA Lucas Oil season ranked 3rd nationally in both Super Comp and Super Gas, Luke Bogacki and his ThisIsBracketRacing.com/K&N Filters backed team entered the 2013 campaign with high hopes. After a slow start at the first two national events of the season, Bogacki appears to be hitting his stride. He followed up a runner-up Super Comp effort at the Phoenix LODRS with a Super Gas title at last weekend’s Division 7 LODRS in Las Vegas.

“It’s always a good feeling to get an event win, and this one is no different,” said an exuberant Bogacki. “Honestly, this was a race that I probably had no business winning. I wasn’t happy with our early season performances in either category, and as a result I made wholesale changes on both cars prior to the race in Vegas. The dragster really liked the new setup, but the Corvette did not. I definitely went in the wrong direction with it, and it was not consistent. I got extremely fortunate in several rounds, and I’ll take a little credit for doing a pretty good job behind the wheel at times as well. It just all fell together, and obviously it’s easier to have fun when everything clicks and win lights are coming on.”

Bogacki advanced through seven rounds of eliminations without the benefit of a red-light or a bye run. He opened eliminations by defeating Brian Fritz, then squeaked out a close victory over Randy Fabbro when his perfect 10.050 ET bested Fabbro’s scant 10.049 breakout. Bogacki went on to defeat Justin Strom, Don Anderson, Mike Wiblishouser, and Rick Cates to advance to the final round alongside Tanner Hiatt. There, Bogacki escaped a double breakout affair, with his .016 induced 10.042 besting Hiatt’s .013 and 10.031.

“Most of my rounds didn’t play out anything like I had pictured them,” admitted Bogacki, “and the final was no different. I thought I could run well under the index, and had every intention of taking the finish line, but I couldn’t get in front. In the end, that’s the only way I could have won. I just seemed to end up in the right place at the right time. Like I said before, I definitely went the wrong direction with the car, but I’ll learn from it and we’ll be better next week. The competition is so tough these days that if you’re not constantly working to improve then you’re going to get left behind. In that effort to get better we’ll occasionally misstep. I was just really fortunate to be able to take what could have and probably should have been a wasted weekend and escape with a victory. Hopefully we can use that to build some momentum going forward.”

In addition to the Super Gas victory, Bogacki advanced to the fourth round of Super Comp before losing to multi-time national and divisional winner, Tom Bayer. With the added NHRA points, Bogacki took the early lead in the Lucas Oil Super Comp standings.

“I want to take this opportunity to thank Charlie and Jason at Charlie Stewart Race Cars for building me a great car,” said Bogacki. “Sometimes I get to making changes and make it look like it’s not a great car, but it is. It works really well. That car is safe, gorgeous, and a dream to drive. I also want to recognize the contributors and members on ThisIsBracketRacing.com, as well as our key marketing partners: K&N Engineering, Tinsley Drilling & Company, C.A.R.S. Protection Plus, Advanced Product Design, Product Development Group, JEGS, BTE, and Mickey Thompson Tires & Wheels. I also want to thank my wife, Jessica. She’s due with our first child in May and she’s a little bummed about not being at the races herself. Her support and faith in me is incredible; I couldn’t do this without her.”

Bogacki will once again compete in Super Comp and Super Gas at this weekend’s NHRA Summit Racing Equipment Nationals at the same facility, The Strip at Las Vegas Motor Speedway. He’ll conclude his season-opening western tour with the Spring Fling Vegas bracket race the following weekend before returning home to Carterville, IL.

Bogacki’s winning ’63 Corvette Roadster was built by Charlie Stewart Race Cars in Azle, TX. The CSRC body features a K&N carbon fiber hoodscoop and paint from Todd’s Extreme Paint in Milan, MI. A Huntsville Engine & Performance 582 powers the car to the 9.90 (10.05 in Las Vegas) Super Gas index at speeds in excess of 160 mph. The powerplant features products from BRODIX Cylinder Heads, Wiseco pistons, Milodon, Dedenbear, J&J Engine Diapers, Jesel, Crane Cams, and Lucas Oil. Earl’s hose and fittings transport Renegade 116+ Racing Fuel through a K&N filter to the APD belt-driven fuel pump, and on to a 1050 cfm APD carburetor specifically calibrated for throttle stop racing. Burnt fuel is exhausted through a set of headers that Stewart built from a Hedman Hedders kit before they were coated by Nitroplate.

Power is put to the ground thanks to a BTE Top Sportsman powerglide transmission and converter, and a Moser Engineering rear-end assembly which includes 3rd member, axles, and brakes from the Indiana manufacturer. Mickey Thompson bead-lock wheels and 3183 racing slicks bolt to the axles and work with a set of Ohlins TTX-36 shocks to apply the torque to the race track. Bogacki monitors tire pressure thanks to a unique new air pressure monitoring system from AirTek. He controls the electronic functions with a K&R Pro-Cube Delay box and switch panel, a Dixie shift solenoid on a B&M Pro Bandit shifter, and a Dedenbear throttle stop; and monitors all of the critical functions of the machine with Auto Meter’s multi-function data logger dash. Additional components come from ISC Racer’s Tape, DragRaceResults.com, California Car Cover, Flo-Fast, American Race Cars, and Nitrous Express. 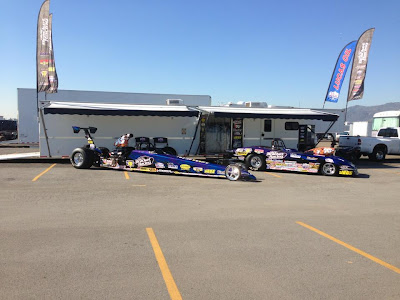 Posted by Brandon Barrentine at 9:25 AM