Getting to know us: Bryan Robinson 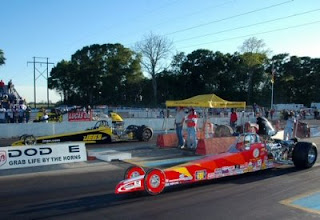 On a regular interval, I will post information about members of our team. I like knowing a bit more about who I interact with in customer/vendor as well as partner/partner relationships. As a business, we feel it is very important that our customers and partners know not just about our prices, products, and services, but also about our credentials and character. - Brandon


Bryan Robinson is a true racing specialist and valued member of the BTE/Memphis Performance team. Bryan's father Johnny Robinson is a 30+ year veteran of bracket racing. Bryan grew up working with his father in their family commercial fishing business on the Tennessee river. Mr. Robinson had been a friend of my family for years, but I didn't meet Bryan until I myself was doing some driving of the first BTE test car at Memphis Motorsports Park.

Bryan, who had likely been driving a race car before he could legally drive a passenger car on the public road system, was a formidable racer on the local tracks and regional bracket races. In 2002 and 2003, Bryan and his father stepped up their racing program and competed nationally for the NHRA Super Gas and Super Comp championships, and in 2003 Bryan was crowned winner of the NHRA Super Gas title. Both Bryan and I had recently completed our undergraduate college degrees, and I felt he would be a tremendous addition to our team at BTE / Memphis Performance when the racing season concluded. I was graciously invited to Pomona, CA that year for the final NHRA event and awards ceremony at the Kodak Theatre in Hollywood. Bryan and I departed from Memphis early in the week to begin race qualifications at Pomona, and his parents and wife Cassie arrived later in the week.

Traveling is a highly effective setting for really getting to know someone: how do they handle stress or fatigue, how to they interact with people from other areas of the country or world, what are their food allergies (don't feed Bryan shrimp), or how do they have fun (that poor rental car...)?

Bryan gave a great winner's speech, and shortly after our return, Bryan joined us here at BTE / Memphis Performance.

Since then, Bryan has continued to race locally, regionally, and nationally in many classes. He has expertise in throttlestop, bracket, and recently, class racing. When not racing his own dragster, Bryan is currently partnered with contemporary and mutual friend Luke Bogacki on a A/SA and B/SA car competing on the NHRA and IHRA circuit. Bryan also leads much of our internal and external testing for new products and new torque converter combinations.

After a long week at the office, Bryan is usually bound for a race on the weekend. He is truly a racing enthusiast.